What Is Two-Photon Microscopy?

This week I am joined by Dr. Craig Brideau, an engineering scientist who has recently joined the LCI team. Craig has designed and built numerous optical systems, and has particular expertise in biomedical imaging using non-linear optics. Over the next several posts, Craig and I will be delving into the practical aspects of two-photon microscopy.

Often research questions require z-stack acquisition so that we can reconstruct and analyze features using 3D volumes; standard options for fluorescence imaging include wide-field and confocal microscopy. Wide-field microscopy is a good choice for thin cells, while confocal microscopy is well-suited for imaging thin tissue sections or for superficial imaging of thicker samples. Imaging through thick tissue can be challenging, however, because tissue absorbs and scatters light, limiting the depth that you can image in your sample.  Indeed, unless you are working with transparent samples or have the option of clearing your samples, the imaging depth is roughly limited to about 150-200 microns from the surface. If you are struggling with achieving the necessary imaging depth, then two-photon (2P) microscopy (generally known as multiphoton microscopy) is a good option.

The physicist Maria Goeppert-Mayer laid the theoretical foundation for two-photon transitions in her 1930 PhD dissertation but we will distill the essentials here. It turns out that it is possible to excite fluorescent molecules using two or more photons rather than a single photon. For example, two photons interacting simultaneously with a molecule can excite it to a higher electronic level, as in single-photon fluorescence. The difference though is that the two photons are about half the energy (thus double the wavelength) compared to the standard single-photon excitation. This allows a near-infrared (NIR) laser to excite a molecule as if it were a visible laser, taking advantage of the reduced scattering offered by the longer wavelengths while still exciting fluorophores that excite in a visible light range. The result is that you can still acquire z-stacks (volumetric data), but at greater depths than conventional confocal microscopy.

Two-photon lasers: the need for power and speed

Compared to the single-photon transitions excited using standard fluorescence microscopy, two-photon transitions are exceedingly unfavorable. Simply put, the probability of two photons interacting with a molecule at the exact same instant is much lower than the probability of a single photon interacting with a molecule at any time. To quote a striking example from a 1997 perspective by Denk and Svoboda: In bright sunlight, a molecule of rhodamine B, an excellent 1- or 2-photon absorber, absorbs a photon through a 1-photon process about once a second, a photon pair by 2-photon absorption every 10 million years; no 3-photon absorption is expected throughout the entire age of the universe. An intense light source is necessary to generate sufficient photons to increase the chance of simultaneous interaction of more than a single photon. In fact, Goeppert-Mayer’s predictions could not be experimentally verified until the invention of the laser provided access to extremely high energies.

To increase the chance of multiple photons interacting at the same moment, a high density of photons is required to localize in both space and time. That is, we need many photons to be in the same place at the same instant. A high power continuous wave (cw) laser (a higher power version as used for conventional confocal) can achieve this, but the constant flow of energy into the sample would destroy it! Instead,  pulsed lasers are used, which create dense packets of photons that exist over very brief timescales (also known as “ultrashort pulsed” lasers). In most two-photon microscopes, the lasers have pulses that last on the order of 100 femtoseconds (fs). For a laser emitting light near 800 nm, each pulse contains on the order of 100 billion photons (25 nJ per pulse). These lasers cycle rapidly, generating tens of millions of pulses a second, leading to a low average power because each individual pulse is exceedingly brief.

While ultrafast lasers pack many photons into a tiny slice of time, a high numerical aperture (NA) lens also focuses the photons into a tight volume. The combination of spatial and temporal focusing vastly increases the intensity of light delivered, and thus increases the probability of the two-photon event will occur. In practice, this means that the emission signal is confined to a smaller volume compared to confocal microscopy. The accompanying figure shows pictures of fluorescence emission from a rhodamine dye solution using wide-field (left) and two-photon (right) excitation. You can see that single-photon emission occurs through a large volume, and the intensity is greatest near the focal point. On the right, the two-photon emission is concentrated to a much smaller volume. To summarize, two-photon microscopy achieves optical sectioning by harnessing a rare photophysical process. 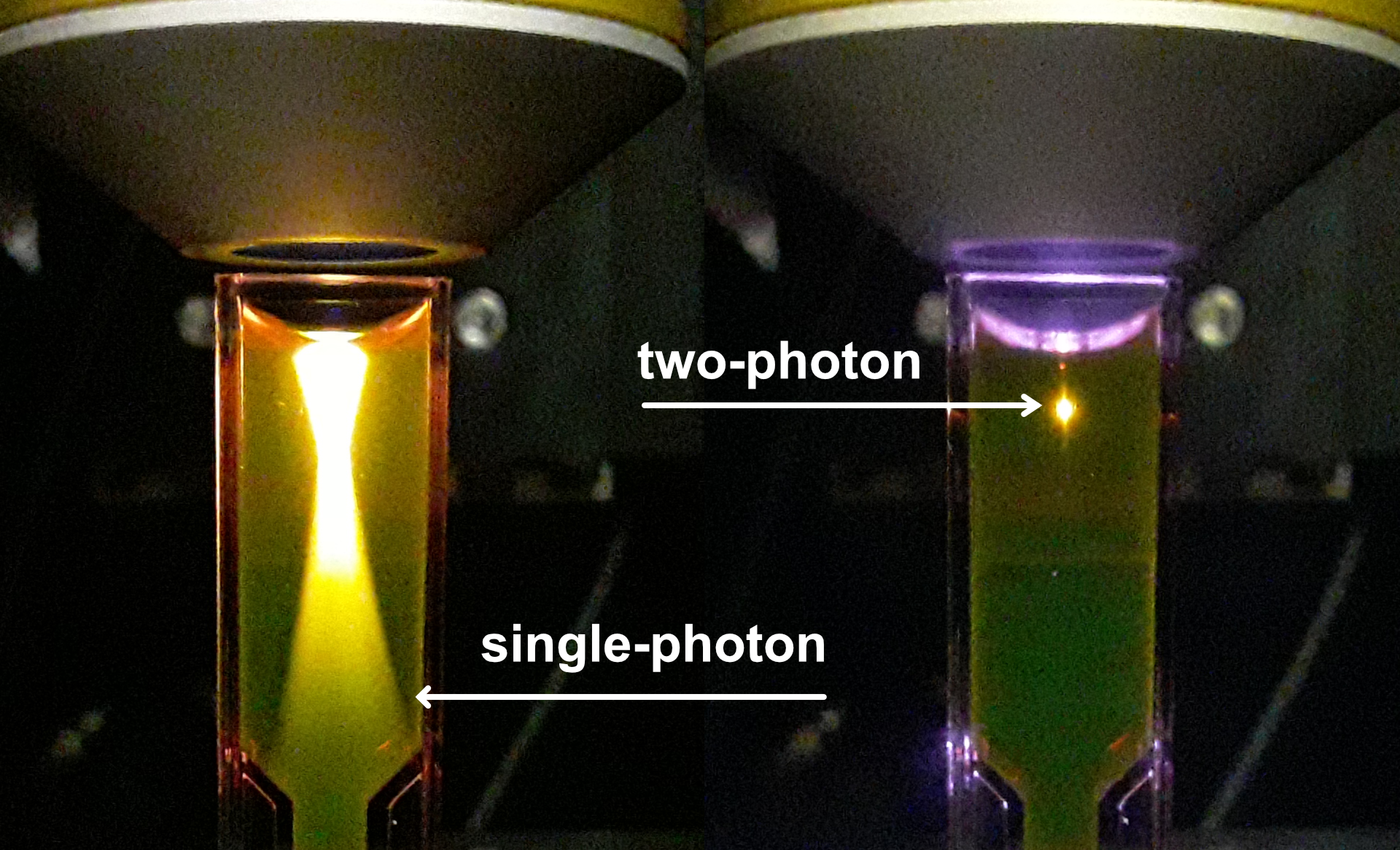 Unlike confocal microscopes, two-photon microscopes do not require pinholes to reject out of focus fluorescence (although a pinhole can be considered if you are working with strong signal). Dispensing with the pinhole makes the detection more efficient when imaging scattering materials such as thick tissue. When tissue scatters photons, they have less chance of making it through the confocal aperture. Without an aperture, a greater proportion of these scattered photons are detected. This means more light from the sample is detected, leading to a stronger signal in the presence of scattering tissue.

In the next series of posts, Craig and I will delve into different aspects of this powerful technique, including how to select the appropriate objectives and probes and tune lasers for optimal multiphoton imaging.