In our last post, Craig and I introduced the basics of two-photon microscopy. This month we will review some considerations for choosing the best objective for your multiphoton imaging. If you are new to objectives and their properties, we recommend that you consult the suggested resources below.

When designing or purchasing a multiphoton microscope, it is important to select objectives that are tailored for the specific application. If non-optimal lenses are used, imaging quality may be compromised. Objectives can be expensive and it is tempting to repurpose a confocal or widefield lens you might have on hand for multiphoton imaging. However, objectives used for confocal or wide-field microscopy typically are not suitable. These objectives are designed to focus and transmit visible light (~400- 700 nm. In comparison, multiphoton imaging typically uses NIR wavelengths for excitation (~700-1300 nm), while the emission is in the visible range. This means objectives used for multiphoton imaging must have high transmission while exhibiting little chromatic aberration over a broader spectral range compared to objectives used for standard fluorescence imaging. If you substitute a visible-only objective it will not effectively transmit or focus the NIR laser. This will reduce your signal and also create undesired artifacts such as chromatic aberration, with the end result being a suboptimal image.

Fortunately, microscope vendors and optics manufacturers produce objective lenses designed specifically for multiphoton imaging. These lenses are chromatically corrected to give good focusing performance with NIR excitation lasers, while still efficiently collecting the visible emission light from fluorophores or from harmonic imaging in the sample. These objectives are usually sold only with multiphoton microscopes and are specified over an effective wavelength range. You can consult with the manufacturers and vendors directly or refer to the technical specifications published in their online catalogs. If you already have an objective, much of this information is directly inscribed on the lens.

Pay particular attention if you are carrying out three-photon microscopy because some lenses for two-photon systems are not corrected to a sufficient wavelength range to also be effective for three-photon. Two-photon systems were the most popular initially, so many optics are designed to operate from approximately 680-1080 nm, which is the tuning range of the Ti:Sapphire lasers commonly used with those systems. Three-photon extends beyond 1080 nm, to 1300 nm and further, so optical designs, anti-reflection coatings, and glass types must be modified and verified for operation at longer wavelengths.

An important consideration for multiphoton imaging is numerical aperture (NA). The NA needs to be high enough to enable the tight focusing required for two-photon (or three-photon) excitation. Yet choosing the objective with the highest NA may not always be the best choice. High NA requires a steeper cone of light from a lens, so often the working distance (WD) decreases as NA increases. (As a reminder, the WD is how far the objective can focus into the sample.) Figure 1 depicts two lenses with NA 0.8 (left) and 1.0 (right). The left lens has lower NA but has a greater working distance (3.0 mm) compared to the lens on the right (2.1 mm). 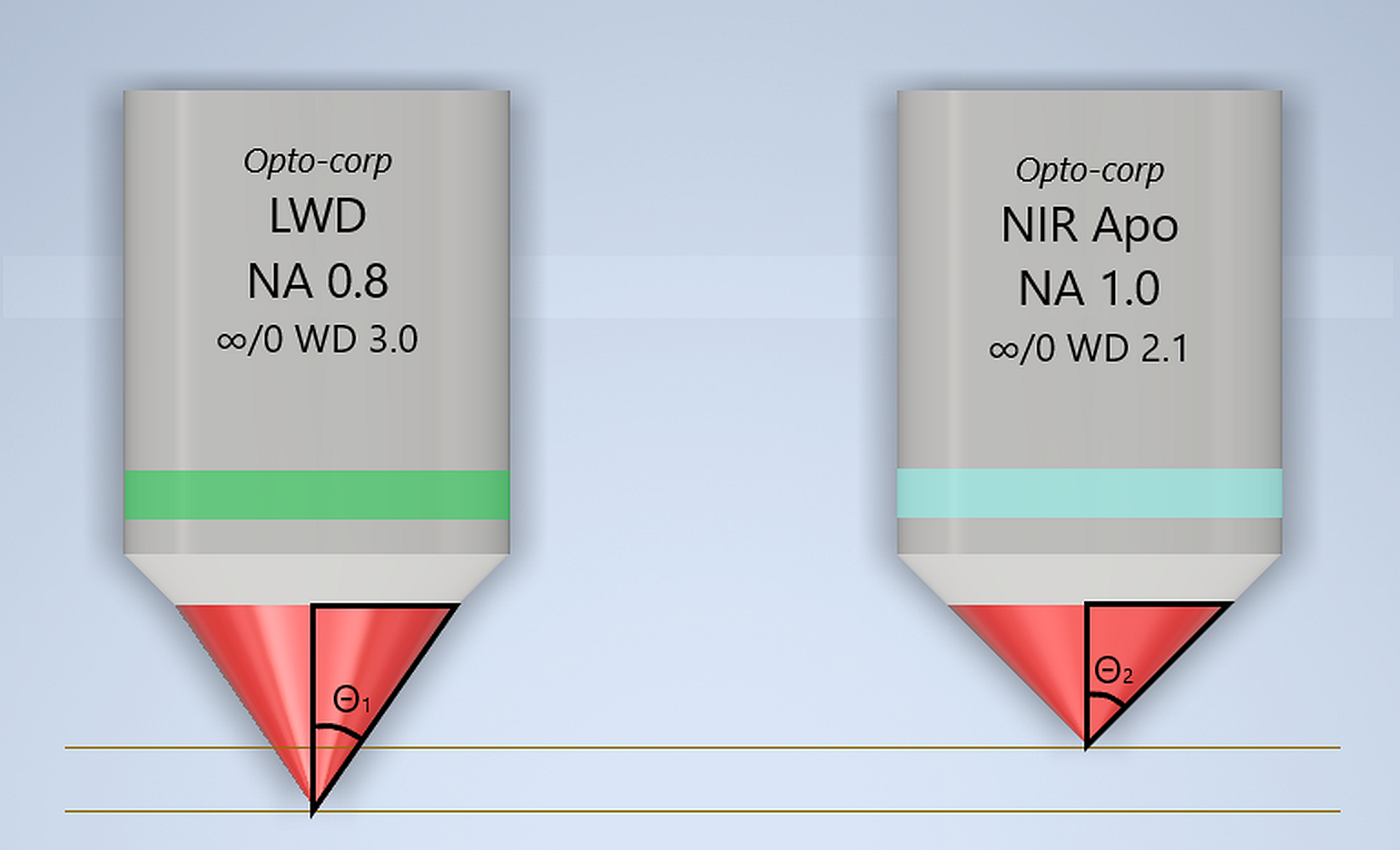 Longer working distances are particularly useful for imaging deep within cleared tissue or for situations where the objective must focus through thick windows and/or media before even reaching the sample. Lower NA light is also less vulnerable to scattering, as the light rays from the lens have less angular variability as they enter the sample and thus take a more direct path to the focal point. For highly scattering samples (even relatively thinner ones) a lower NA lens may paradoxically perform better than a higher NA lens at the same depth solely due to the reduced impact of scatter on the narrower cone of light resulting from the lower NA. Conversely, for shallower imaging, such as tissue slices, or tissues which scatter less, resolution may be more important than depth so a higher NA objective may be appropriate.  Like many decisions in the imaging workflow, the choice between NA and WD involves balancing often-opposing considerations.

You can have it all (almost)

While it seems that NA and WD are opposing parameters, WD can be extended for high NA lenses by making the lenses wider, thus allowing the cone of light from the lens to reach further. These are often described as “long” or “extended” working distance lenses by manufacturers and typically have longer-than-usual WD for a given NA. This requires larger optical components within the lens, however, which drives up cost. The extra width also increases the bulk of the lens which can make imaging difficult when space is limited. Many “extra wide” lenses for multiphoton also require a larger diameter turret thread and thus will not work with standard objective turrets.

Figure 2 shows three lenses of identical NA, but varying WD. From left to right, the WD is increased at constant NA by enlarging the diameter of the optics. The rightmost lens represents a typical “widebody” design, where the manufacturer creatse an extra-wide lens to achieve longer WD. These types of lenses usually require a larger turret design and can be more cumbersome to maneuver around a sample, but can offer a compelling combination of both high NA and long WD in the same lens.

Fig.2 Increasing the width of the optics increases the working distance of the lens as can be observed from left (narrowest aperture) to right (oversized lens). All of these lenses have NA 0.5 but with increasing working distance as lense diameter increases. NA shown here to scale, but real-world lenses will frequently have much higher NA and even longer WD than shown here.

Besides wavelength correction, WD, and NA, there are many other options and considerations for objective selection. Visible light performance, correction collars, and whether a lens is designed to work as an immersion, dipping, air, and/or a combination are all important to consider as you optimize your choice of objective for your imaging needs. We will delve into these features in future posts.